NOTE: This entry is in draft form; it is currently undergoing the VSFP editorial process.

Introductory Note: "The Little Dog" is one story in a series called “Fables” that was published in The Strand Magazine. As was common to many short pieces in the Victorian period, this story was illustrated by its author, J. A. Shephard. Characteristic of the fable genre, Shepherd’s series often employs animals (often anthropomorphically) as the main characters in short stories designed to illustrate a moral lesson. In “The Little Dog,” a small dog seeks to serve his master as fully as the master’s other animals. On advice from his mother, the little dog serves his master to the best of his ability and although his contributions are small, his tenacity ultimately proves his loyalty to his master. 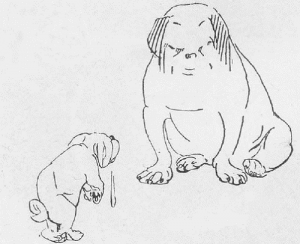 1.—“What shall I do,” said a very little dog one day to his mother, “to show my gratitude to our good master and make myself of some value to him?”

2.—“I cannot draw or carry burdens like the horse; nor give him milk like the cow; nor lend him my covering for his clothing like the sheep; nor produce him eggs like the poultry; nor catch rats and mice as well as the cat. I cannot divert him with singing like the canaries and linnets; nor can I defend him against robbers like our relation, Towzer; I should not be of use to him even if I were dead, as the hogs are. I am a poor, insignificant creature, not worth the cost of keeping; and I don’t see that I can do a single thing to entitle me to his regard.” 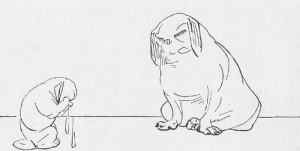 3.—So saying, the poor little dog hung down his head in silent despondency.

4.—“My dear child,” replied his mother, “though your abilities are but small, yet a hearty good will is sufficient to supply all defects. Do but love him dearly, and prove your love by all the means in your power, and you will not fail to please him.”

5.—The little dog was comforted by this assurance—

6.—And, on his master’s approach, ran to him, licked his feet, gambolled before him— 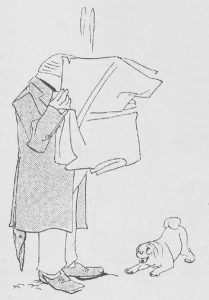 7.—And every now and then stopped, wagging his tail, and looking up to his master with expressions of most humble and affectionate attachment. 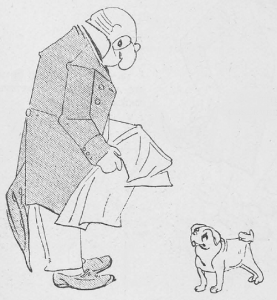 8.—The Master observed him. 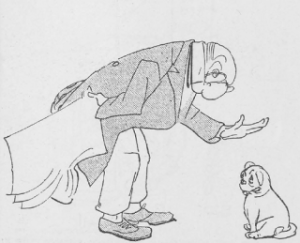 10.—And stooped down to pat his head. 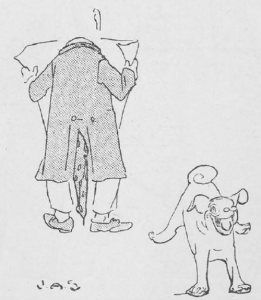 11.—Poor Fido was ready to go out of his wits for joy. 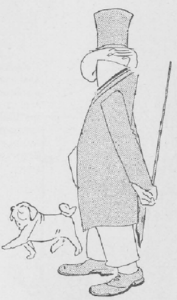 12.—Fido was now his master’s constant companion in his walks—

13.—Playing and skipping round him— 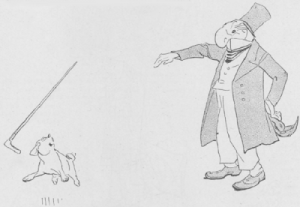 14.—And amusing him by a thousand sportive tricks. 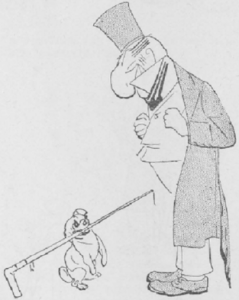 15.—He took care, however, not to be troublesome by leaping on him with dirty paws—

16.—Nor would he make reference to any visit his master might make by the way.

17.—Fido now grown older made himself useful by a number of little services. He would boldly dash out and drive away the sparrows as they were stealing the chicken’s meat—

18.—And peremptorily order out any strange pigs that offered to come into the yard.

19.—He kept the poultry and geese from straying beyond their bounds, and particularly from doing mischief in the garden. 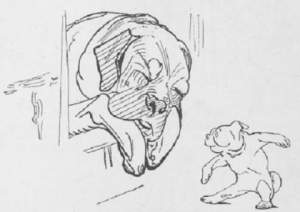 20.—And was always ready to alarm Towzer if there was any suspicious noise about the house, day or night. 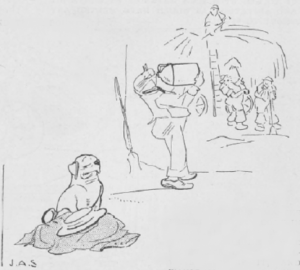 21.—If his master pulled off his coat in the field to help his workmen, as he would sometimes do, Fido always sat by it, and would not suffer either man or beast to touch it. By this means he came to be considered a very trusty protector of his master’s property. 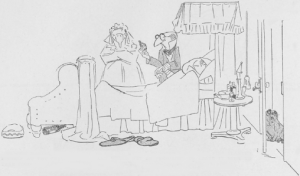 22.—His master was confined to his bed with a dangerous illness. Fido planted himself at the chamber door, and would not be persuaded to leave it even to take food—

23.—And as soon as his master was so far recovered as to sit up, Fido, being admitted into the room, ran up to him with such marks of excessive joy and affection, as would have melted any heart to behold. 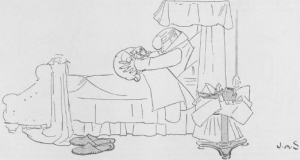 24.—This circumstance wonderfully endeared him to his master.

25.—One hot day, after dinner, his master was sleeping in the summer-house, with Fido by his side. The building was old and crazy; and the dog, who was faithfully watching his master, perceived the walls shake. He comprehended the danger—

26.—And began barking to awaken his master; but this not sufficing to thoroughly awaken him— 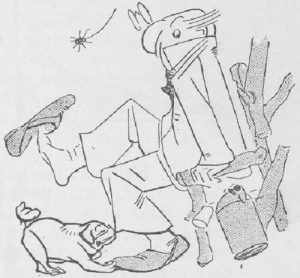 27.—He pulled him gently by the leg of his trousers. The master upon this started up—

28.—And had just time to get out of the door before the whole building fell down. Fido, who was behind, got hurt by some rubbish which fell upon him.

29.—On which his master took care of him with the utmost tenderness, and ever afterwards acknowledged his obligations to this little animal as the preserver of his life. Thus his love and fidelity had their full reward. 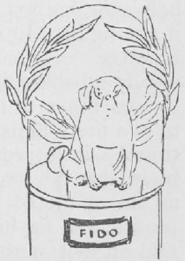 An MLA-format citation will be added after this entry has completed the VSFP editorial process.