NOTE: This entry is in draft form; it is currently undergoing the VSFP editorial process.

Like many short stories in the Victorian Era, this one included full-page illustrations. In fact, the story's author, May Bowley, was likely more well known for her illustrations, than her literary efforts.  “Fairy Flights” is about the land of Fairies and the fairies’ attempt to live like mortals. Fairies were a topic of interest for Victorians, many of whom tried to capture them on film and discover if there were real. This fairy story is particularly interesting because when the fairies try to live like mortals they end up miserable, suggesting that the Victorian way of life is somehow lacking. 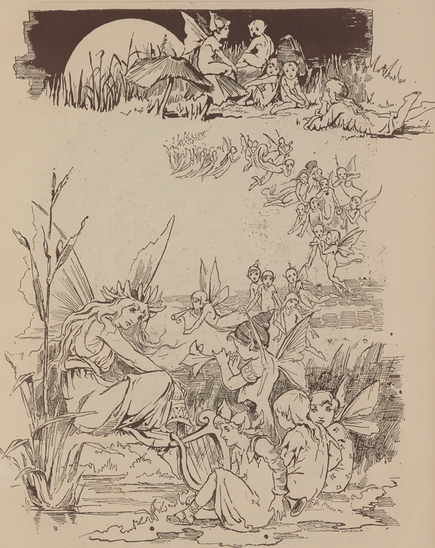 One night the Fairies, pining for a change, pay a visit to Earth. 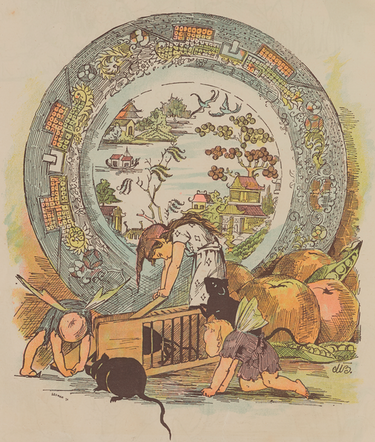 Three young Fairies wandering away from the others in search of adventures, come upon a poor little Mouse caught in a trap, and they determine to do an act of mercy, and after much trouble they succeed in setting it free. 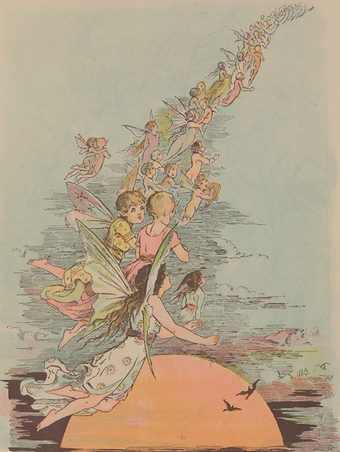 By command of the Queen the Fairies must always return to Fairyland at sunrise. 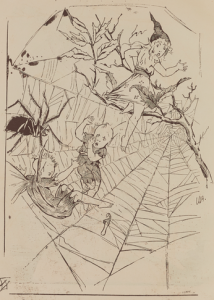 Virtue is not always rewarded, for these three Fairies, who helped the Mouse while hurrying back to Fairyland, are caught in the web of the Spider King. 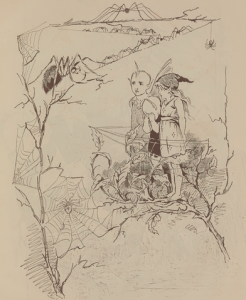 The Trial.-A jury of twelve Spiders is summoned to attend the trial of the three prisoners, and the King Spider at last only sentences them to supply him with food for three days till the web is mended, for the Spiders dare not harm a Fairy. 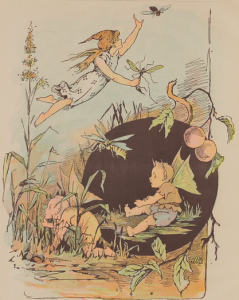 They agree to theses terms, and begin to work for the Spider. 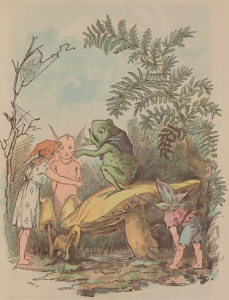 They make arrangements for lodgings. 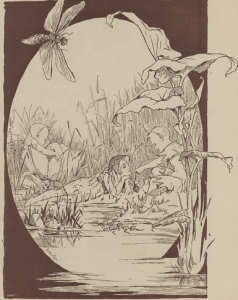 After some days of fly-hunting for the Spider, the Fairies begin to think Earth rather pleasant, and they decide to stay on a visit. 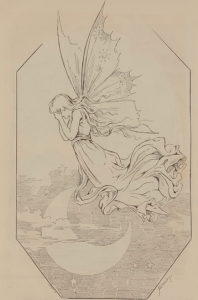 When they do not return to Fairyland their sorrowing Fairy Mother comes down to Earth to find them. 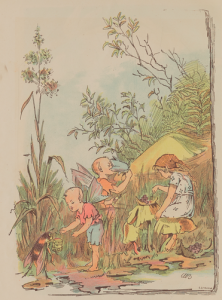 They enter into possession of their new home, and take their first breakfast in it. 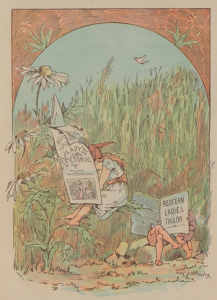 They study the dress of the Mortals. 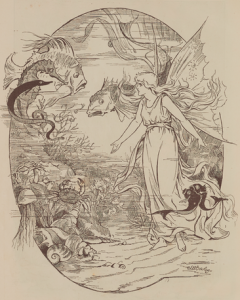 The Fairy Mother makes inquiries under the Sea, 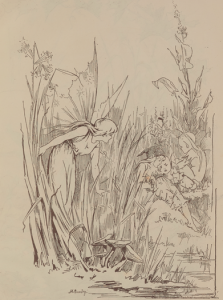 And finds her children at last, three home-sick Fairies! 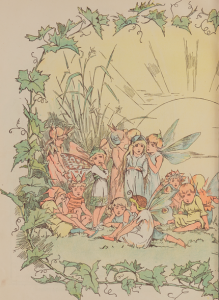 The three truants having returned to Fairyland and told their adventures on Earth, the other young Fairies who have never been to Earth, except an occasional visit at midnight, grow discontented with Fairy life and long to be like Mortals. 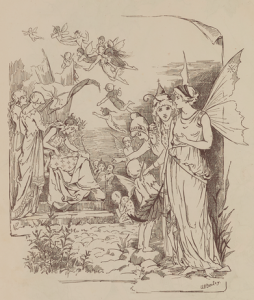 The young Fairies have decided to emigrate to another part of Fairyland, to give up Fairy life, and adopt that of the Mortals. They take leave of the Queen and their Mother. 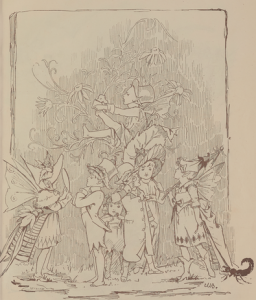 The Fairies start their new life, and dress in the latest Earthly style. 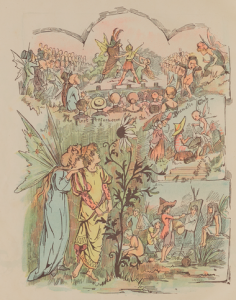 Some of the Fairies develop a taste for art. 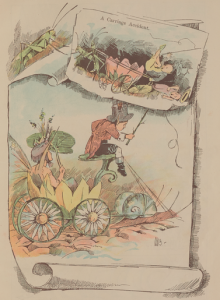 It is no longer fashionable to fly! 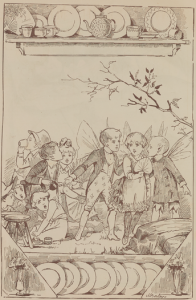 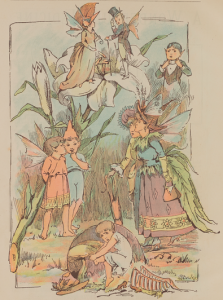 After awhile the Fairies begin to find the dress of the Mortals so uncomfortable that, in defiance of fashion, many of them go back to the old styles. 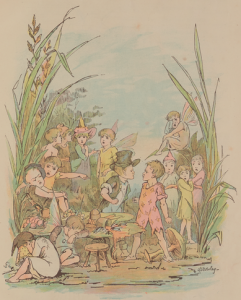 The Fairies’ dinner and smoking party comes to an untimely end. They are all getting so cross and ill-tempered that they quarrel and fight for the first time. 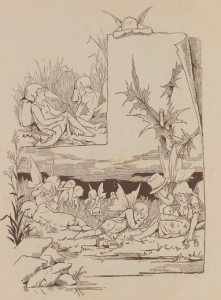 The terrible effect of the dinner party next day. 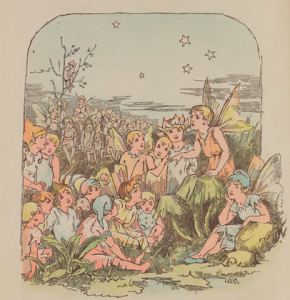 They meet in council to discuss what is to be done now. They have found the life of the Mortals not so delightful as they expected. The meeting lasts all night, and at dawn it is resolved by all the Fairies to go home and resume their old life. 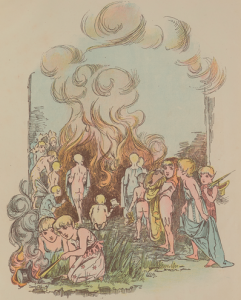 They make a large bonfire, and burn up all their fashionable clothes before starting for home. 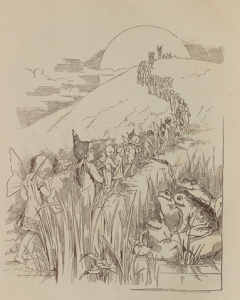 The return of the sadder yet wiser Fairies. The Frogs come out to laugh and jeer as they march past.

An MLA-format citation will be added after this entry has completed the VSFP editorial process.